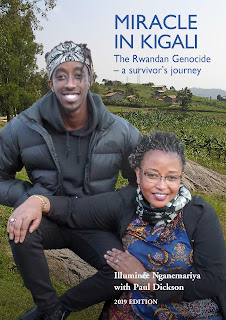 Miracle in Kigali - The Rwandan Genocide, a survivor's journey, by Illuminee Nganemariya with Paul Dickson (2019 edition), marking the 25th anniversary of the Genocide against the Tutsis, was published in Norwich on Monday 8 April. The book tells the amazing story of Illuminee and her baby son Roger Nsengiyumva's survival in Kigali, the capital of Rwanda, during the 1994 Genocide and subsequent life in Norwich.

Miracle in Kigali was first published by The Tagman Press in 2007. This new edition, which updates Illuminee and Roger's story, including Roger's developing film and TV acting career, is published by Paul Dickson Books, price £12.

The authors are donating £2 from the sale of every book to Glaven Valley Churches work with Life in Abundance charity in Rwanda.

Roger was most recently seen on TV as Dadir Hassan in the 2018 BBC drama, Informer. He began his acting career when he was chosen in 2010 to play the role of Fabrice in the feature film, Africa United. The route to Roger's acting career began with Africa United's producer seeing an article about Miracle in Kigali, featuring a photograph of the young Roger.

How does it feel to wake up every morning for more than three months facing the prospect that you and your newborn baby are likely to be brutally murdered that day? This was Illuminee's experience as she existed for 100 days in the living hell of Kigali, after watching her husband be dragged away to be killed by friends who had celebrated their wedding with them a month earlier.

Eventually rescued by soldiers from the Rwandan Patriotic Front on Mount Kigali, Illuminee and Roger moved to the UK in September 1996 to build a new life in Norwich.

"Miracle in Kigali is an extraordinary documents - a unique, tragic, insider's guide to Genocide. This is a book about what a mother will endure to keep her child alive. I read it and wanted to give Illuminee a big hug. She's my hero." Nick Andrews, BBC.

Nick Andrews was the Director of a BBC3 TV documentary, Roger: Genocide Baby (2011), featuring the teenage Roger returning to Rwanda and exploring how his home country had moved on from the Genocide.

Miracle in Kigali 2019 edition is on sale at Jarrold Norwich, Jarrold Cromer, Revelation Christian Bookshop Norwich and online at Allthingsnorfolk.com and Amazon. An e-book is also available, click here for the Kindle edition.

Do you have the following issues contact Priest Mandaker for the best solution.
* Is your love falling apart?
* Do you want your love to grow stronger?
* Is your partner loosing interest in you?
Priest Mandaker Alamun can help you perform the following spells
*  Fast Working Love Spell
* Make The One I Love, Love Me Back Spell
* Break Up Spells
*  Heal My Broken Heart Spells
*  Binding Love Spells
* Commitment Love Spells
*  Marriage Love Spells
* Friend Become My Lover Spells
* Powerful Love Binding Spells
* Can’t Live Without You Love Spells
*  Kiss & Make Up Love Spell this is designed to reunite lovers
* Good Luck Attraction Spell
* Stop Arguments Spell
* Return Your Ex-Lover now spell
* Have Him / Her Desire You spell
* Keep Your Lover Faithful spell
* Attract Your Soul Mate spell
* Break Them Up Break Up And Return Your Lover spell
* Keep Us Together Forever spell
* Protection And Cleansing spell
* Make Me Irresistible spell
* Click this link witch-doctor.page4.me
* Witchhealing@outlook.com