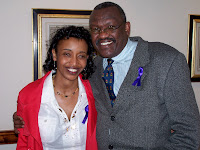 Illuminee gave testimony as a survivor at the London Commemoration of the 15th Anniversary of the 1994 Genocide of Tutsi in Rwanda on Tuesday 7 April. Her speech is in the previous entry on this blog. The Commemoration was organised by the Rwandan Embassy http://www.ambarwanda.org.uk/ and also included speeches from the Rwandan Ambassador, His Excellency Claver Gatete, Brigadier General Frank Rusagra and Nemat Shafik, Permanent Secretary of the Department of International Development (DFID).

Fifteen candles were lit by young Rwandans living in the UK, a symbolic representation of each year of peace in Rwanda since 1994.

A documentary by Nick Hughes called Roadblock was shown featuring footage of people being killed at a roadblock, taken by Mr Hughes during the Genocide, and the stories of those who survived the roadblock. More information about the film here
http://rwandacinemacenter.wordpress.com/iseta-the-story-behind-the-road-block.

Ambassador Gatete launched 'The One Dollar Diaspora Campaign' in support of Genocide orphans in Rwanda, aiming to raise $200,000 in the next 100 days - the length of the Genocide in 1994.

Illuminee is pictured with Brigadier General Rusagra at the reception which followed the Commemoration.
Posted by Paul Dickson at 00:44